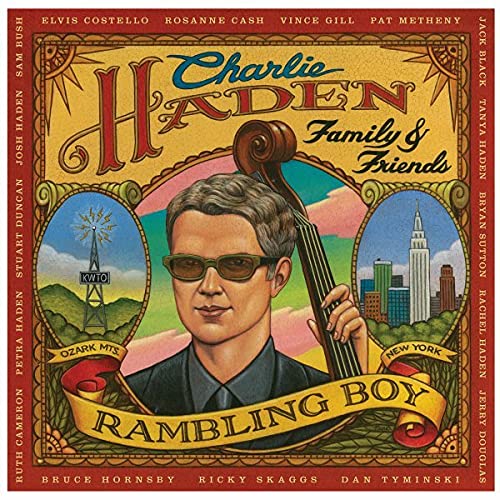 The acclaimed jazz bassist changed the shape of jazz playing with the original Ornette Coleman Quartet in the late 1950s and went on to record some of the most seminal albums in music with artists like John Coltrane, Keith Jarrett and Pat Metheny. With his 2008 record, Haden fulfills his dream to play the Haden Family songs with his wife and children and such close friends as Bruce Hornsby, Rosanne Cash and Elvis Costello. The album's nineteen songs explore the worlds of country and jazz, and range from traditional to contemporary Americana.

Charlie Haden was literally born into country music. His parents Carl and Virginia Haden (professionally known as "Uncle Carl" and "Mary Jane") led the self-contained Haden Family. The Haden Family--which also included Charlie's two older brothers, Carl Jr. and Jim, and his older sister Mary-- was heard on every major radio station in the South and Midwest. The group had its own radio show on radio station KMA in Shenandoah, Iowa, performing both popular songs of the day and Carl Haden originals like "Moberly Mine Disaster" and "Ozark Moon."

"My parents toured all over the country, going from one radio station to another to perform" Charlie recalls. "They were on their way to Des Moines when a snowstorm came up. They stopped at a motel in Shenandoah, where my dad called the local radio station and asked if they could come in and audition. They got the job and ended up staying there."

Charles Edward Haden was born August 6, 1937 in Shenandoah, Iowa; he was not quite two years old when he first sang on the radio. This precocious performance by "Little Cowboy Charlie" was recorded--and now appears as "Haden Family History," the penul¬timate track on. Rambling Boy. It segues into "Oh Shenandoah," sung by the mature Charlie Haden in a moving tribute to his parents.

When Charlie Haden was four years old, his family moved to Springfield, Missouri to take a job at radio station KWTO ("Keep Watching the Ozarks"). In an interview with Amy Goodman for "Democracy Now," the artist said: "My dad was the MC, he gave all the commercials--Wait's Green Mountain cough syrup, Sparkalite cereal, Allstate Insurance...We had all kinds of sponsors. We got bags of mail from all over the country. "

"And it was really a great experience for me...being close to my family and devoted to this music. My life was filled with music, and I learned so much about harmony and melody singing with them"

Charlie continued to sing with the group until age 15 when he contracted bulbar polio. The disease weakened the nerves of his vocal cords, and effectively put an end to his singing career. But Haden continued to play bass, the instrument he'd picked up a few years earlier, and his life changed forever when he heard Charlie Parker play on a "Jazz at the Philharmonic" concert in Omaha, Nebraska.

"That's when I decided to play jazz," he says. "So in order to save enough money to get to L.A. and go to music school and meet my idol, [pianist] Hampton Hawes, I began playing bass on `The Ozark Jubilee,' a network television show based in Springfield."

"Red Foley [1910-1968] was the host of the show and then Eddie Arnold [1918-2008]. Eddie Arnold's guitar player was Hank Garland and Grady Martin was the guitarist for Red Foley. They were both wonderful musicians and we'd play jazz tunes whenever there was a break on the set...I've always found that really good country musicians are usually jazz fans."

In 1956, Charlie Haden moved to Los Angeles and enrolled at Westlake College of Modern Music. Within a year, he was playing jazz with Hampton Hawes and saxophonist Art Pepper; soon after, drummer Lennie McBrowne introduced Charlie to Ornette Coleman...and the rest, as they say, is history.

Always one to defy conventions and expectations, bassist Charlie Haden attained his now legendary status through his ground-breaking work with the original Ornette Coleman Quartet in the late Fifties, recording some of the most seminal albums in the genre with artists like Keith Jarrett, and leading his own Liberation Music Orchestra. Charlie's consistently broadminded approach to music has led him to record with everyone from John Coltrane to Ringo Starr to Herbie Hancock - as well as continue to record his own unique and timeless albums

Throughout this three-time Grammy Award winner's career, there is palpable evidence of his deep and abiding passion for American roots music. Haden's duo recording with guitarist Pat Metheny, Beyond the Missouri Sky, created a set of unforgettable aural landscapes evocative of their shared Missouri roots. Haden also explored the American spiritual music tradition with the legendary Hank Jones on his classic album Steal Away.

But even those listeners familiar with the artist's celebrated career may not know of Charlie Haden's early years in country music performing with his family. Charlie Haden Family amp; Friends: Rambling Boy brings the artist's personal history full circle and presents a new generation of the Haden Family - a legendary Midwest music institution in the 1930s and 1940s, now reborn in the 21st century. Due out in August 2008, this 19-track collection is the artist's first release for the Decca/Universal label and a singu¬lar addition to his illustrious discography.

Rambling Boy includes songs made famous by the Stanley Brothers, the Carter Family, and Hank Williams alongside fabled traditional tunes and some striking original compositions. The performing cast includes Charlie Haden, his wife and co-producer Ruth Cameron, all four of his children (the triplets Petra, Rachel and Tanya Haden, their brother Josh Haden), and his son-in-law Jack Black-- each of whom has his or her own career in music. In addition, Rambling Boy features guest appearances by some of the most illustrious names in contemporary Americana and popular music: Roseanne Cash, Elvis Costello, Vince Gill, Bruce Hornsby, Ricky Skaggs amp; the Whites, and Dan Tyminski and also includes such illustrious country amp; bluegrass musicians as Jerry Douglas, Sam Bush, Stuart Duncan, and Bryan Sutton, to name a few .

Yes, this is the same Charlie Haden who set the jazz world on fire with Ornette Coleman on Change of the Century and Free Jazz. Yes, this is the same musician who re¬kindled the mystery and passion of "noir jazz" with Quartet West on the albums Haunted Heart and Now Is the Hour.

Royalty-Free Stock Photos for as low as $0.20USD/download or free

Icons, clipart, logotypes and more. All scalable and editable without any loss of quality.

Hand drawn or computer generated, we’ve got a great collection of illustrations for all your projects.

Millions of clips up to 4K, growing everyday. Stunning video by talented producers.

Everything sounds better with music. Explore our collection of music and sound effects.

Free image of the week

Download this image for free
Get all the latest info, freebies and a free trial delivered right to your inbox!
Stock Photos by Dreamstime

The right image anytime, anywhere with our mobile app for iOS & Android

Get it on the Apple App Store or Google Play Store

Automatic image classification, object detection, keyword suggestions, smart cropping and more can deliver better results for you and for your users.

Welcome to Dreamstime, worlds' largest community for royalty-free photos and stock photography. Established since 2000, our vast collection of professional stock photos is enriched daily with photos from talented contributors from all over the world.

Whatever image you need, we have you more than covered with millions of photos, illustrations and vectors, spanning a wide array of categories and themes, at prices that anyone - from large corporations to various magazines and blogs - can easily afford.

Do you have a project that calls for more than stock photos and images? Well, we haven’t forgotten about you! In addition to our deep well of royalty-free image assets, we also offer thousands of high-quality, professionally produced audio clips, royalty-free music and video clips. Like our database of images, our database of stock video footages and audio files continue to grow, with hundreds of new additions uploaded daily!